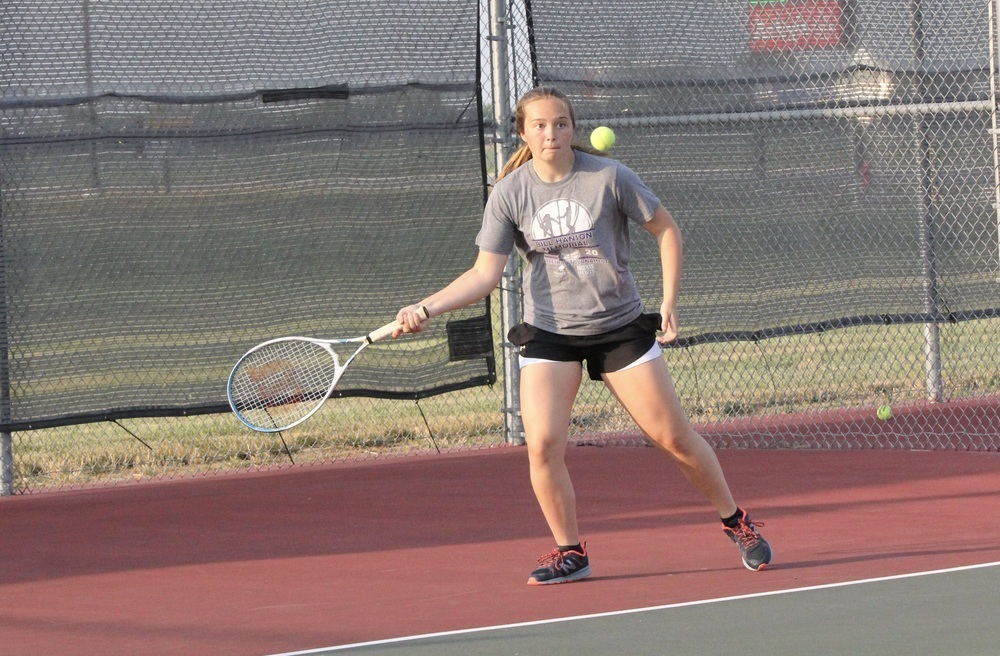 For twenty-one consecutive years a week of Chanute High School Girls’ Tennis coach Mike DeLaTorre’s summer has involved developing student-athletes’ skills.  This summer was no different.  Coach Mike, as he’s affectionately known, welcomed an average of thirteen students to the annual CHS girls tennis camp.  “This camp is really a culmination of work that started at the beginning of June,” DeLaTorre said before camp’s final session Friday evening. Throughout the week which began on Monday, June 21st CHS Comet tennis players engaged in what their coach identified as “very intense” voluntary practices.

“Every athlete who attended the camp has improved throughout the week,” DeLaTorre’s evaluation was enthusiastically affirmed by early arriving camp participants.  DeLaTorre’s goal is not merely to increase Tennis skills but to cultivate a family atmosphere within the program.  Coach spoke with candid appreciation for his players, “There’s just no drama with these athletes, everyone pushes one another.  They’re such a great group of students.”

Camp typically takes place in July but was moved to June this Summer due to a plan to resurface the tennis courts at Chanute High School.  DeLaTorre noted that resurfacing the courts was a commitment by the USD 413 school board to the Tennis program’s growth.  This commitment echoes the decision during last summer to add tennis as an extracurricular activity at Royster Middle School.  “I’m so thankful for the board’s decision and the resources they devoted to the middle school program,” DeLaTorre said as he remarked on the level of preparation younger players can now possess before reaching the high school ranks.

When asked why he has chosen to host the tennis camp every year, even during the Summer of 2020 replete with its myriad challenges, DeLaTorre simply said “It’s a chance for every athlete who attends to get better, as individuals and as a team.  I always really enjoy helping all our players.”